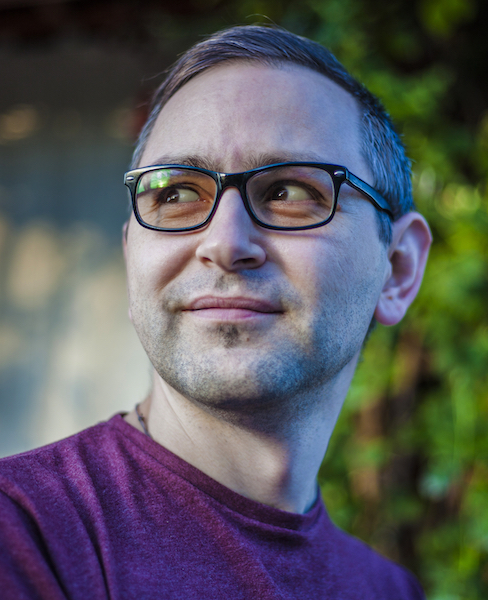 I love stories. Growing up without television, i was captured by fantastic books and by the magical audio world of the vinyl stories and radio shows. So, if I wasn't listening to stories or reading about them, I  was making them up.

Together with my brother Alex, we started writing short stories about crazy adventures far away from Romania's restrictive communist regime. We went to VHS video screenings, where we would watch smuggled VHS tapes of western banned movies. There we got to see our first american films that would infect our world. At that time we were making up games on paper and  we would do puppet shows to visually tell stories.

We started using our family's audio recorder to record our first audio tape, a spoof of a popular radio show. Movies became a big part of my childhood. Every chance I got, I was running away to our local cinema to see new worlds and dream about possibilites & hope.

After the fall of the regime, technology and computers finally reached us. We got to play a lot of videogames. A new wave of movies inspired us both. My stories universe got bigger and bigger and has been expanding ever since.

I was lucky to have art in my life from a very young age. My father is a painter and just by being around him and in his study, we absorbed his love for art, life and nature.

In Artschool i discovered my love for Photography, and later I would get to study it at the University together with Film & Computer Graphics. That helped my stories evolve into visual stories, storyboards, short films, animations and video games.

I got a videocamera and I started making short films by myself or with my friends. Video seemed to have a very special texture that i loved experimenting with. The films were the perfect medium to tell the stories we've been dreaming since childhood. A language for my ideas and fears.

It was only when i went to Filmschool that I discovered another big part of filmmaking, collaboration. I found other dreamers to work and get inspired with. Some of our films were selected & screened in various film festivals and venues around the world. It was a very special time to meet and learn about filmmaking.

I am often inspired by stories from everyday life that become doorways into fantastic worlds, places where the mundane meets the supernatural.